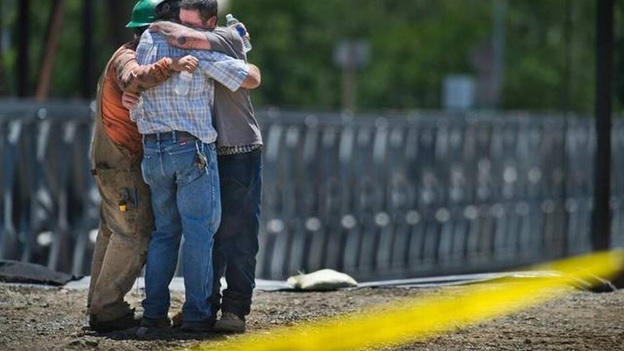 Three men hug near where the bodies of two workers were recovered after they died when their crane-hoisted lift basket fell 80 feet at a bridge construction site on Putah Creek in Winters. The basket landed on timbers covering a 30-foot hole dug for footings for the new span. The 10-worker crew included the father of one of the men killed, said Richard Disney, president of Burlingame-based Disney Construction, which was building the bridge. HECTOR AMEZCUA HAMEZCUA@SACBEE.COM https://www.sacbee.com/news/local/crime/article124001954.html

On the day of the incident workers were using a pile driver crane when a cable broke near the top of a pile driver.

A second crane was then used to hoist a personnel platform with two workers, Marcus Powell and Glenn Hodgson, so they could troubleshoot the cable on the pile driver.

The rigging used to connect the platform to the crane dislodged, causing the platform and workers to fall some 80 feet to the ground. https://www.dir.ca.gov/DIRNews/2014/2014-107.pdf

The crane operator, Mark Powell, was charged with involuntary manslaughter in the death of his son, Marcus, and the other victim, Glenn Hodgson. Cal-OSHA said Mark Powell used an aging crane that needed repairs and was not approved for lifting – to hoist Marcus and Glenn 80 feet into the air where the basket broke and both men fell to their deaths.

In addition to what Cal-OSHA characterized as a “long list of mechanical deficiencies,” the agency said in its report of the incident that the basket used to lift Powell and Hudson did not have a working safety latch. According to Cal-OSHA inspectors, Disney supervisors failed to inspect the crane and personnel lifting equipment, which they determined was “the root cause of the accident.” https://www.constructiondive.com/news/ca-crane-operator-charged-in-fatal-accident/433201/

“Since the decision was made to use a crane and a personnel platform, the root cause of the accident was the failure to survey and inspect the equipment being used and the equipment being repaired,” the agency’s inspectors concluded. https://www.sacbee.com/news/local/crime/article124001954.html