A 45-year-old owner of an electrical contracting company died after falling 9 feet to the road when the articulating boom of the aerial lift truck he was working from collapsed (photo 1).

The victim, working at a height of approximately 35 feet, was changing light bulbs on overhead streetlights along a state highway. After replacing a bulb, he began lowering the boom. The upper boom actuating chain connecting the upper and lower boom sections broke and the upper section fell, striking the truck bed. The impact broke the metal mounting bracket that attached the bucket to the boom tip causing the bucket to rotate away from the boom. The victim was thrown from the bucket, striking the back of his head and neck on the truck before coming to rest on the road surface. The six-foot lanyard did not prevent the victim from striking the truck as the distance from the lanyard’s anchorage point to truck bed was less than six feet.

A co-worker (the victim’s son), witnessed the collapse from the ground and began resuscitation efforts. The victim’s wife was also present on site and worked as part of the crew. The victim was pronounced dead at the hospital from massive head trauma.

A crew member stated to investigators the victim had talked about the boom making a “funny noise” earlier in the day. Company records documented periodic maintenance on the engine and chassis components of the truck, but no records were available to support an ongoing maintenance program for the articulating boom.

Post incident inspection of the articulating boom revealed the boom actuating chain had separated resulting in the catastrophic collapse of the upper boom (photo 2). 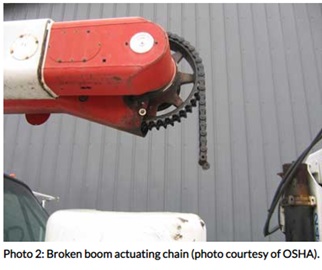 It appears lack of proper lubrication of the chain is likely what caused the chain to break. This incident highlights the significance of: 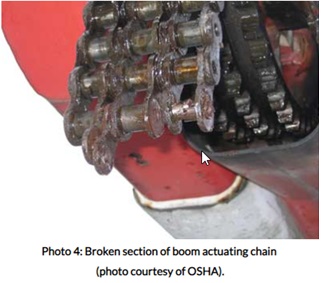 2. Pre-use inspection and removing suspect equipment from service until has been made safe to use.

3. Regular maintenance and inspection by a qualified person.